Apollo 1: The Cost of Getting to the Moon

Almost everything in life that is worthwhile comes with a high cost.  A good marriage, a life that counts for something, raising a family — all come with a cost.  I was reminded this week of the cost of getting to the moon.  Apollo 1 was a big part of that cost .

Most Americans under the age of 50 can tell you that Neil Armstrong was the first man to walk on the moon.  Many

of them can also tell you that Apollo 11 was the name of the mission that carried Neil Armstrong to the lunar surface.  Very few of them can tell you about the missions before Apollo 11, especially Apollo 1, which never flew.

I hope to do my part to rectify that situation.

It occurred fifty years ago, in 1967.  The United States was just wrapping up the Gemini program, which had followed Project Mercury.  The US was launching the Apollo program, which for the first time would put three men in space at one time.

On the afternoon of January 27, 1967 Command Plot Gus Grissom, Senior Pilot Ed White, and Pilot Roger Chaffee entered their space capsule — the command module (CM) – for tests.  The CM was sitting atop of an unfueled Saturn V rocket.  The crew was to determine if the spacecraft would operate on simulated internal power.  The first flight of the crew was scheduled for February 21, 1967.  However, the spacecraft had to pass this test (among others) for that launch to occur four weeks later.

The crew entered the cockpit at 1:00pm Eastern Time and ran into several problems over the next few hours.  For example, Gus Grissom reported a foul smelling odor, which the ground crew could not diagnose.  The crew also experienced several radio problems with mission control and other entities.  One of the chief problems was “stuck mic”.  In other words, Gus Grissom’s microphone was stuck in the open position, which lead to several communication issues.

Then, just past 6:30pm, the crew reported “Fire” in the cockpit.  There were several radio utterances over the next few seconds, but in less than a minute the crew was gone.

The insides and outside of Apollo 1 after the fire

An investigation followed.  It was determined that the fire was caused by arcing from internal electrical equipment.  Because the capsule was under greater than atmospheric pressure and contained 100% oxygen, the fire spread rapidly.  Combine pure oxygen with a spark and you basically get a bomb.

So many Americans remember the Challenger disaster as well as the Columbia disaster.  Let’s not forget Apollo 1. 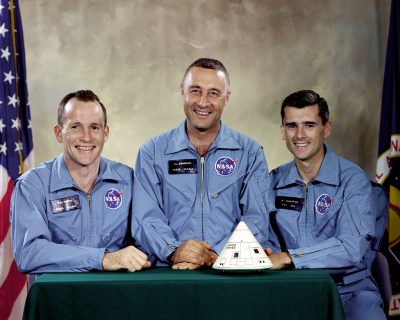 I was reminded of this cost this past week when a speaker in chapel showed coverage of the thrilling moon mission of Neil Armstrong/Apollo 11.  The famous televisions news anchor, Walter Cronkite and his color commentator, retired astronaut Wally Schirra, wiped tears from their eyes after the momentous event.  I suspect that part of Schirra’s tears were remembering the heavy price we paid to get Neil Armstrong on the moon.  Part of that price was paid by Gus Grissom, Ed White and Roger Chaffee, their wives and children.  It was a high price.

Achievement comes at a cost, those of the Christian faith know that their salvation comes from the price of Jesus of Nazareth spilling his blood on a cross.  Let us not forget the price some pay for our achievements and benefit.

More information on Apollo 1 can be found through the Smithsonian Institute:  https://airandspace.si.edu/explore-and-learn/topics/apollo/apollo-program/orbital-missions/apollo1.cfm

NASA’s summary of the incident can be viewed at:  https://history.nasa.gov/Apollo204/