Jackie Cochran and the T-38 Record

Jackie Cochran and the T-38 celebrated an anniversary this week.  Jacqueline Cochran is, next to Amelia Earhart, the most famous female pilot in United States history.  On October 12, 1961 she set two records in the T-38.

Jackie Cochran rose to fame in World War II.  She could see war on the horizon and got the word to Roosevelt that female pilots may be needed in the war effort.  She began recruiting women pilots to ferry planes across the Atlantic for the British Ferry Command.

In 1943, Hap Arnold (the Father of the modern Air Force) asked Cochran to develop a program to train women to fly.  It became known as the Women’s Air Force Service Pilots (AKA WASP).  Eventually she helped train over 1,000 pilots for the war effort. 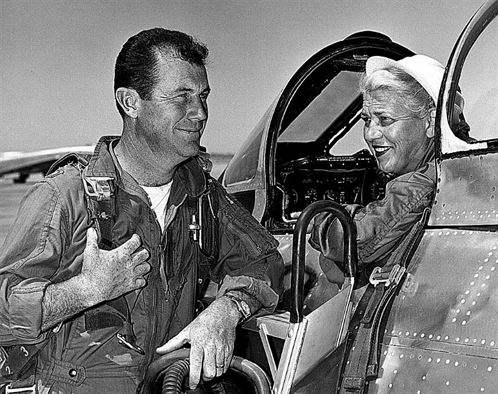 Following the war she became a test pilot and was the first woman to break the sound barrier.  With the help of her good friend, Chuck Yeager, she accomplished the feat in 1953 flying an F-86 Sabre Jet.  More of her career can be read about at: http://www.hill.af.mil/About-Us/Fact-Sheets/Display/Article/397171/jacqueline-cochran/

Twenty four years later, I would break a personal record in the T-38.  Over the west plains of Texas, I broke the sound barrier for the first time in “The White Rocket” as we called the T-38.  What a thrill.

Thirty two years later, the Air Force is still training aspiring plots in the T-38 Talon.  She is a beautiful bird and fun to fly.  I am not surprised that the legacy has continued for 56 years after Jackie Cochran sets those records.

Doctor Aviation on a T-38

3 Responses to “Jackie Cochran and the T-38 Record”