Tanker Trip to Guam VI | A Day of Adventure

What do you do as a visitor to a tropical island (and you are not on a three hour tour).  The Air Force has its share of difficult duties.  I remember once operating on a KC-135 at Eielson AFB in Fairbanks Alaska one evening and it was -30F outside.  We couldn’t get the crew cabin window shut!  That was miserable.  But for all of the tough times there are some “good deals” along the way.  That is my topic for today.  What we did for recreation 30 years ago this Fall on the island of Guam.

As I sit and write this blog a winter storm is heading my way and I need to get out of the office quickly.  How ironic that I would be writing about a tropical island on a day like today.

As I mentioned in an earlier blog, we were invited for the baptismal celebration of a Guam resident.  It was a tremendous feast/celebration and the older residents treated us like royalty.  On the way back from that area, on the Marine Highway, I saw something that only happens in stories.  Do you remember the answer to the question, “what is at the end of the rainbow”?  That answer of course is a pot of gold.  Unless, you are in Guam.  It is difficult to see, but I snapped this picture of a rainbow touching down ON the Marine Highway.  Unless I am mistaken the asphalt is not made out of gold.

Kevin was driving when I snapped the photo.  We were in what is known as a “Guam Bomb”.  Personnel stationed at Andersen AFB would purchase an old car, what we would call a “beater” nowadays.  In Guam, we called such a car a “Guam Bomb”.   They would rent them to the aircrews for maybe $15 a day.  On one excursion, we ran into a local rancher with his cow.

One day we took our vehicle to Talofofo Falls.  It is located in the south central part of Guam.  http://theguamguide.com/talofofo-falls/  It was simply beautiful.  I snapped several photos of the crew “on location”.  My favorite part was a rope swing.  We would climb up into a tree, swing out and drop into the body of water below.  It was like something out of the movies.

On the way back, we drove by a rock over an inland body of water just off of the beach.  It told the crew that we had to check it out.  It was a somewhat salty body of water.  I don’t recall if it had a name.  I was tempted to jump in, but did not want to get all salty after having showered off at Talofofo Falls.  Then, I thought, when will I ever get the chance to do this again?  I went for it.  It is hard to see, but I am airborne in the photo below. 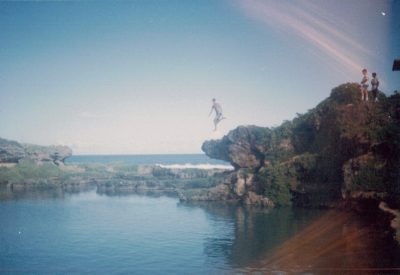 Please know that there are many, many hardships in the military and not every day was like this day in Guam.  But there are some days when you are thankful that you are in the military.  You even say, “Can you believe that they are paying me to do this”?