This is the fifth in a series of blogs regarding one of my most successful (and fun) KC-135 Tanker missions.  For the first see: https://www.doctoraviation.com/tanker-trip-island-guam/   As we touched down around Labor Day just over 30 years ago, I had much to learn about Andersen AFB and the Island of Guam.

As mentioned in a previous blog (https://www.doctoraviation.com/christmas-bombings-1972-tanker-trip-guam-iv/) the United States came into possession of Guam after the Spanish American War.  Andersen AFB is located at the northern tip of the island and was built in 1944.  We landed towards the evening in 1987  and when I exited the airplane, my first thought was, “I feel like I am in Florida”.  It was that same moist, humid, tropical heat one feels in the Sunshine State.

On December 8, 1941, the day after Pearl Harbor was attacked, the Japanese invaded and took Guam with overwhelming forces.  The Americans had less than a 1,000 troops on the island and the invasion and surrender occurred in about 48 hours.  The Chamorro’s endured brutal conditions under the Japanese occupation.  Many were forced to work at bayonet point and some were executed after their labor was complete.  Forced marches of over 10,000 Chamorro’s occurred.

Relief came in 1944.  From July 21 to August 10 the Americans invaded and retook the island after brutal fighting.  The Japanese never surrendered and fought to the last man. The Chamorro’s were so very grateful that the Americans had come to liberate them.  Conversely they grew a great hatred towards the Japanese.  I personally found that any Chamorro old enough to remember World War II and the occupation was extremely grateful to all of us service members.

For example, we as a crew attended the celebration for the baptism of a local and it was a great tropical feast.  There must have been 200 in attendance under a bamboo shelter with palm trees all around.  The Chamorro women over the age of 50 were practically tripping over themselves to serve us and make us feel welcomed.  They remembered and appreciated the liberation so much.  The younger citizens, not so much.  The young men, in particular, seem to glare at us.  Suspicious that we would “steal their women”.  They need not fear, Kevin and Mac were married.  I was not interested.

There is a heavy military presence and influence on the island.  The main road is known as the Marine Corps Highway (AKA Guam Highway 1).

The Challenge of Runway 24

The flying out of Andersen AFB was good.  Initially, we had a local training mission so that the detachment commander at Andersen could be assured we were a reliable crew.  We seemed to pass with flying colors.  However, the biggest flying challenge was the runway.

The main runway at Andersen AFB is 06 / 24.  Due to the prevailing winds, we almost always landed and took off from Runway 06.  However, the day the fiscal year ended, September 30, we had a little bit of a challenge.  We had gone on a local training mission.  There is a rule of thumb in the federal government and the Department of Defense (DOD):  If you don’t spend all of your budget, you will get less money the next year. 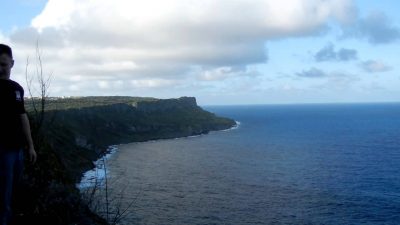 We were sent out to fly out the remaining training time budget for the year.  We came back to the traffic pattern and found that we were to land on Runway 24.  Here was the challenge: shortly before the approach end of Runway 24 lies a cliff, dropping vertically to the ocean.  I would estimate that the cliff is about 200 feet in height.

The cliff presents a flying challenge for two reasons.  Number one, both strong updrafts and downdrafts can occur with a cliff right along the ocean.  The wind is rarely calm at such a point.  So if the wind is blowing out from the island, there will be a strong downdraft on short final.  If the wind is blowing in from the ocean there will be a strong updraft on short final.  Both will affect the pilot’s ability to keep the aircraft on glide slope. 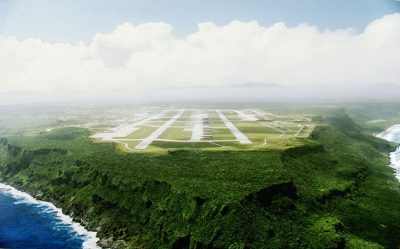 We would have more excitement about a flight a few days later.  Look for that story in a future blog.

As a reminder, if you have not done so yet, sign up for the Spring semester of Doctor Aviation at: https://www.doctoraviation.com/register/