Tanker Trip to the Island of Guam II

This blog continues the saga of my memorable Tanker Trip to Guam 30 years ago.  As chronicled in the previous blog (https://www.doctoraviation.com/tanker-trip-island-guam/ ) we had been selected to be part of the Pacific Tanker Task Force.

The crew assembled early in the morning with enough personal gear to last for 42 days.  Our alert bags served nicely in this role.  An alert bag carried the gear we would need should be dispatched on short notice on our nuclear deterrent mission.  The items were well specified in our regulations and publications. They were inspected periodically so we essentially kept them packed at all times.  I had emptied the permanently packed bag, the day before and began to stuff it full of clothes, equipment, toiletries, scuba gear and swimsuits that I would need to sustain life on a tropical island.  This was going to be more than “a three hour tour” with Gilligan.

I was going with a great, but relatively inexperienced crew.  I had been checked out as a fully proficient copilot (Co) for about 15 months.  The aircraft commander (aka AC) was Kevin.  Kevin was a good AC, flew well and saw the situation well.  However, he had been fully qualified as an AC for only a few months. Dorothy was the navigator (Nav).  She was positive, upbeat and from Chicago.  She had proceeded me at the Air Force Academy by a year and had been a Nav for fully qualified Nav for about two years. 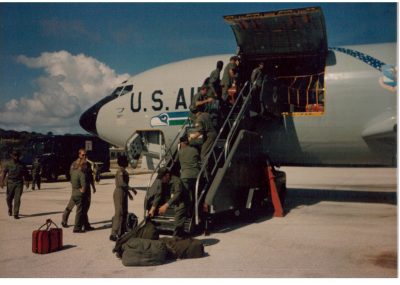 What we lacked in experience, was made up for by Mac.  Mac was a boom operator and was probably the most knowledgeable and capable Boom in the whole squadron.  Mac had been in Vietnam in the 135.  I used to joke with him, “Mac when you were flying over North Vietnam, I was in elementary school watching you on The CBS Evening News with Walter Cronkite.  The Boom Operator was responsible for everything behind the cockpit cabin.  Mac could refuel anything, load anything (the Boom Operator also served as a loadmaster) and could use the sexton to shoot celestial navigation bearings better than anybody.  I remember Kevin’s wife hugging Mac before we left and whispering, “Take care of them”.

We departed from Fairchild with a bunch of cargo, four crewmembers and about a half a dozen Space A (Space Available passengers, “catching a hop”) heading for Hawaii.  I remember a young couple (he was a Lieutenant) and his new bride being on board.  He came up front to talk flying, she followed about 30 minutes later looking for her groom.  His “flying talk” time had expired.

As we headed past the coast of Washington and out over the Pacific I was not to see another large body of land for over a month.  About 100 miles past Seattle, I dialed up the HF radio.  We were getting out of radio and radar range of US based controllers.  Over the US airliners generally use VHF radio frequencies, while the military uses UHF.  Neither system transmits far enough over the water, hence the need for HF (High Frequency) radio.  The HF radio bounces it signals up against the atmosphere.  As a result, there is a lot of extraneous static and noise on the HF radio.  Airlines have a dampening system that removes the static.  The Mighty KC-135 had no such system.

To make matters worse, the controllers over the Pacific have a strong “Oriental” accent.  I use that term purposefully, as it seemed to be a mix of Chinese, Korean, and Japanese.  It was not easy to understand (at least for me).  The favorite phrase by the controller was, “Roger, Roger…” (Roger, means, “I hear and understand”)

After a while, the whole thing could give you a headache.  It is the pilots’ duty to monitor the radios.  Monitoring the HF generally falls to the junior pilot, the Co, in this case me.  Kevin was kind, he took a couple half hour stints to give me a break.   After several hours of listening to a lot of “Roger” and static, we came within UHF radio range of Hawaii.  The 50th State was only 100 miles away.

The adventure will continue in my next blog.

Doctor Aviation Back to School Sale
20% Off — that is $40 in savings, enroll now — offer ends at Midnight August 20!
Use Discount Code 20Fall