A week or so after arriving in Guam, we were deployed off the island for another mission, this one to Okinawa and Kadena Air Base.  Okinawa is a southern island of Japan.  It is located 954 miles from Tokyo, which is on the island of Honshu.  Okinawa’s relationship to Japan is similar to the relationship the United States has with Puerto Rico.

We mission planned on a Sunday and were off for the trip on Monday.  It was a total of 1,400 miles and we logged about 4 hours flying time enroute. It was a rather uneventful flight.  I endured the same HF radio static and “Roger, Roger” calls that I had encountered from the US to Guam (https://www.doctoraviation.com/tanker-trip-to-guam-ii/) .  I snapped a few photo of the island, which can be seen below 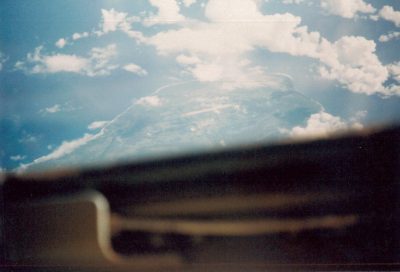 Kadenna AFB is an amazing place.  It was built after World War II, after the US won Battle of Okinawa.  The Battle for Okinawa was very bloody.  The battle resulted in over 12,000 American, 95,000 Japanese, and over 140,000 locals’ deaths.

It turns out that the Battle of Okinawa is one of many factors that indicated to President Harry Truman that the Japanese would never surrender in World War II without drastic action.  They fought to nearly the last man for the Island of Okinawa (and other islands) that were not even considered their homeland.  An invasion of the main islands of Japan was estimated to cost between 400,000 and 800,000 American lives, plus 5 to 10 million Japanese lives.  As a result President Truman made the decision to drop the atomic bomb on both Hiroshima and Nagasaki.  Both bombings resulted in high numbers of deaths.  However, the total deaths were very likely much less than would have occurred under an invasion of the Japanese homeland.  The human dimension of these battles and decisions are well chronicled in the book, Killing the Rising Sun.  The stories are spine tingling.

I was anxious to get off the base to get a peek at Japanese life.  Perhaps I could purchase some fine china (at a reduced rate) for my sister’s upcoming wedding.  I struck out on that account.  What I learned off base is that there are a lot of people in Japan.  I also learned that I am much taller than Japanese men and tended to stick out like the proverbial “sore thumb”.  I would not make a very good spy.

One of Many Crowded Streets see Kentucky Fried Chicken at the intersection.  Menu shown above

The greatest surprise was to find the Japanese great love of Kentucky Fried Chicken (KFC).  They absolutely adore it!  I spotted a franchise and snapped some pictures.  When I went inside I attempted to explain to them that I was from Kentucky.  When I finally got the message across I was transformed into instant “Celebrity Status”.  They eyes lit up and great smiles came over their faces.  I did not know how to communicate that I had actually met Colonel Harlan Sanders (the founder of KFC) and spoken with him.  Had I been able to, I suspect I would have been carried through the streets on their shoulders!

I was able to see a couple of my flying buddies.  Dan and I compared notes on the KC-135 and Clay promised to have some patches I had drawn out made for me the next time he went to Korea (as well as some monogrammed luggage and flight gear).  We found that the Kadenna crews went TDY a lot.  Kevin and the crew saw some old mates from Fairchild.  Our own flying was really routine while on the island.

What I hoped for was a sighting of the SR-71 Blackbird.  It was still highly classified in 1987.  The top airspeed was classified as was its service ceiling (i.e. how high it could fly).  Sightings of the bird were rare.  The best chance to see it would be while taxiing the KC-135.  Sometimes Ground Control would abruptly halt the KC-135s taxi, so that the SR-71 could emerge from its hangar, quickly taxi by and take off only to disappear within a matter of minutes.

I looked over and caught a glimpse of the Blackbird’s silhouette in a hangar.  I snapped a picture.  But the call from Ground Control never came.  That was as close as I got to the speedy SR-71.

I snapped a photo of a landing KC-135 and then we were cleared for takeoff, heading back to the island of Guam.

The SR-71 can be seen in the open hangar on the left.