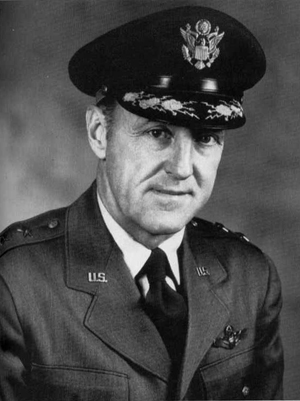 Yeager was a military test pilot stationed at Wright Field in Dayton Ohio when his commander, Colonel Albert Boyd, selected him for the attempt.  Boyd chose Yeager due to the young airman’s keen mechanical ability and calm under pressure.  Yeager was tapped to replace a man named Slick Goodlin, who had demanded too much money, as a civilian test pilot, to attempt the feat.  Goodlin thus lost his chance at aviation immortality.

Chuck Yeager and the location of Muroc Army Airfield

Yeager was sent out to Edwards AFB, then known as Muroc Army Airfield.  He began a series of flights in the Bell X-1.  A bullet shaped plane that was built by the Bell Aircraft Company of Buffalo, New York.  There were several test flights before the barrier was broken.  One of the great technical difficulties was the fact that the pilot was unable to raise or lower the nose of the aircraft at speeds around .95 Mach.  Apparently the shock wave removed the air from around the vertical stabilizer causing the issue.  Jack Ridley, one of the engineers, cleverly fixed the problem.

How fast is Mach 1, (AKA the sound barrier, the speed of sound)?  It is the speed of how quickly sound waves travel and at sea level it is around 760mph.  However at the 40,000 foot level where Yeager was flying it is around 660 mph.  Ironically, breaking the sound barrier was not planned the day Yeager accomplished the feat.  He was supposed to go to around .97 Mach.  Yet, while heading towards Victorville, CA the Bell X-1 accelerated more than anticipated and the first sonic boom was heard on the desert floor.  The sound barrier was broken.

The flight remained classified for several months, keeping Yeager from notoriety.  It was also kept secret that Yeager was flying with a couple of busted ribs on the flight.  Breaks courtesy of a tumble off of a horse the prior weekend.

This past week there were lots of celebrations of the event at Edwards AFB.  You can see some brief footage of the original flight at the following website:  http://abcnews.go.com/US/video/oct-14-1947-chuck-yeager-breaks-sound-barrier-34653783 A local station also covered some of the anniversary events:  http://www.wlwt.com/article/70th-anniversary-of-first-supersonic-flight-celebrated/13020662  .

In a future blog I want to detail what happened to all those intimately involved in Yeager’s historic flight.

Until then, I highly recommend the following blog written by one of the families that has taken the DoctorAviation.com course.  They took part in the Anniversary celebration this past week.  The blog is a fantastic read with lots of great pictures.  It is written by my friends at Counting Pinecones:  https://countingpinecones.blogspot.com/2017/10/70th-anniversary-celebration.html   Enjoy!